when Auguste Renoir was young... 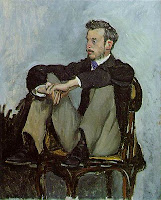 Auguste Renoir was a tailor's son and, as a boy, slept on his father's workbench -- the low wood platform on which the father sat crosslegged each day and sewed. Unfortunately for Auguste, his father often left stray pins there...ouch! For a while as a teenager he had work hand-painting pieces of china, but one day a visiting artist informed the family that Auguste must become a real painter. The family burst into tears, knowing that would condemn their son to poverty. On the other hand, as a boy he had a beautiful singing voice and his choirmaster, the composer Gounod ("Faust" etc.), hoped Auguste would become an operatic tenor. Ah, the turns of fate! We might today hear stories of the legendary tenor Renoir as Faust instead of the sweet, gifted painter he became! Did he sing when he painted?
Posted by Stephanie Cowell at 6:57 AM