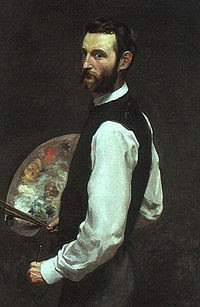 This self-portrait from the Chicago Art Institute is rather strange; he was only about 24 or 25, and painted himself at least fifteen years older. Or perhaps it is the tension of staring at himself in the mirror or some discomfort about himself which made him paint that way. Various paintings and photos of him show him as dashingly handsome, humble while painting at his easel, and very much the formidable son of a great family in still another. The first drafts of my novel CLAUDE & CAMILLE featured Bazille as the main character; he later moved to third major character. I have many books about him, perhaps all that have been published in English and a few in French.
Posted by Stephanie Cowell at 9:00 AM