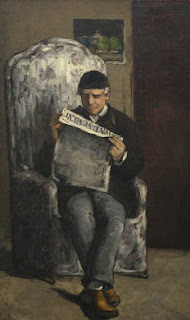 “My wife only cares for Switzerland and lemonade,” Paul Cézanne grumbled before separating from Hortense Fiquet Cézanne; the separation was a pity since their beginnings had been so passionate and clandestine. He was born in 1839 to a wealthy co-founder of a bank, a likely quizzical and stubborn man, whose portrait reading the newspaper painted by his son is one of my favorites. Monsieur Cézanne set Paul to enter the law, but the rebellious boy instead took off to Paris to study art. There, nobody in the art world could comprehend what on earth his painting was about.

At the age of 30 he met the bookseller Hortense and had a devil of a time hiding her from his father, who would of course have stopped his allowance. Poverty and secrecy wore on their relationship, though the young artist finally confessed to his father that he had a wife and son. But when Paul Cézanne’s father died the next year, leaving the artist a wealthy man, Hortense separated from him, leaving Paul to spend the rest of his life painting his beloved Provence mountain and apples and growing into the great artist we know today.
Posted by Stephanie Cowell at 10:16 AM