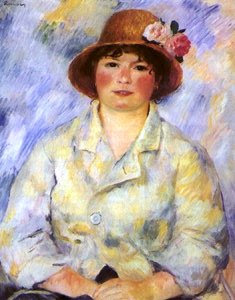 According to Renoir's biographer Georges Riviere in the book Renoir et ses amis, the artist at about 40 became immediately infatuated with the 19-year-old seamstress Aline Charigot when they met around 1880. To him, she was perfection and indeed she was very much a "Renoir" in figure, for she became more cheerfully plump as the years progressed, something which endears her to my heart, as I seem to be doing the same! Renoir doubted his gifts and profession in those days (six years after the first Impressionists exhibition the artists were still financially struggling) and she gave him confidence and stability.

Riviere wrote, "There were times when he would put down his palette and gaze at her instead of painting, asking himself why he tried, since what he was trying to achieve was there already." I like that!

I looked on line for a copy of Renoir et ses amis and there seemed to be none for under a few thousand dollars. I will search further; otherwise that purchase will have to wait a little.
Posted by Stephanie Cowell at 8:42 PM