the blunt and gifted Mary Cassatt 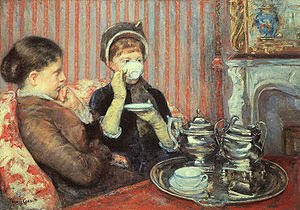 Mary Cassatt’s parents objected to her becoming a professional artist, but even so this American painter moved to Paris to study in 1866 (the year Claude Monet met his love Camille) with her mother of course as chaperone. Women could not attend the prestigious École des Beaux-Arts at that time, so she studied privately. After some years, Mary returned to America and but later she was able to settle in France once more with her family, including her beloved sister who was in poor health. A blunt woman, Cassatt was welcomed by the newly banded impressionists whom one critic thought were such bad painters that they were “afflicted with some hitherto unknown disease of the eye.” Cassatt did not think so. She wrote, “We are carrying on a despairing fight and need all our forces.” Encountering Degas, she knew she had found her light.

More to come about this remarkable artist in further posts!
Posted by Stephanie Cowell at 7:09 AM