Did the impressionists make good husbands? 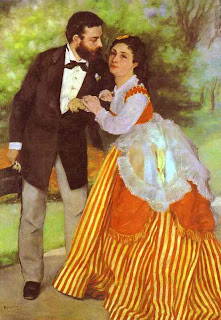 Many people think of artists as promiscuous and it is true a few of the impressionists had a roving eye. When Manet's wife caught him following another woman, he excused himself, saying,"But I thought it was you, dear!" However, Monet, Pissarro, Sisley, and Renoir were very devoted to their wives and depended on them very much. Monet never painted anyone as much as he did his first wife Camille; Renoir married a seamstress in his 40s and adored her, and Pissarro married his mother's maid Julie. As for the famous women artists, Cassatt did not marry and Morisot married Manet's brother Eugene....a real story there! The painting shown is of Sisley and his wife by their good friend Renoir.
Posted by Stephanie Cowell at 11:24 AM