The lost years of the Giverny gardens. 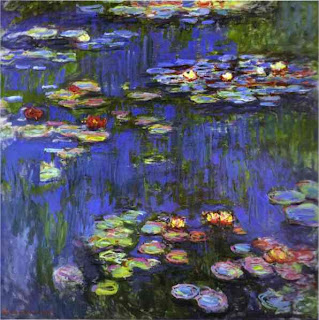 Forty years had passed since Claude Monet’s death when his younger son Michel died in 1966 and during that time little or nothing was done to keep up the gardens. The Academie des Beaux-Arts (the heirs to the property and house) found them in ruins. Rats overran them. The greenhouse panes and the windows in the house were reduced to shards after the bombings of World War II. Floors and ceiling beams had rotted away, a staircase collapsed. Three trees were even growing in the big studio. Almost ten years were necessary to restore the gardens to their former magnificence.

The new custodians expected only a modest number of visitors but, to their surprise, the numbers grew steadily until they now exceed a half million each year. One of the Giverny guides writes a poetic journal in French of life in the gardens today which can be found on line at http://givernews.com/
Posted by Stephanie Cowell at 7:15 PM