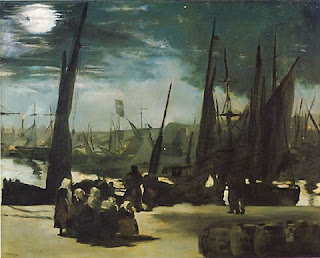 The painting is Manet's Moonlight over the Port of Boulogne, painted in 1869 when he was 37. If fate had turned another way, the blond dandy would have been on a ship rather than painting one from shore. When Edouard was seventeen, his father (who was not impressed by Edouard's dreams of a life in art) sent the young man on a training vessel to Rio de Janeiro. The navy was not to be his destiny for he twice failed the exam. However, he found the women on land charming (as he subsequently found many women) and some historians feel it was there that the sensual Edouard caught the syphilis which would bring on his early and tragic death.
Posted by Stephanie Cowell at 5:45 AM