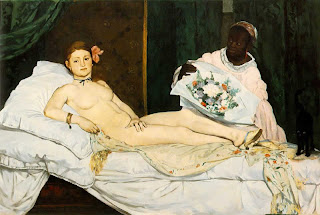 At any rate, the nation of France acquired the painting in 1890 with a public subscription raised by Claude Monet, whom Manet had helped financially - a story I told in a previous post. A great favor returned by the generous Monet who, as soon as he had anything to give and a stable roof over his head, was glad to aid his friends. Years before he was one of the grieving pallbearers at Manet's tragically early death. How these impressionists were all connected!
Posted by Stephanie Cowell at 10:39 AM