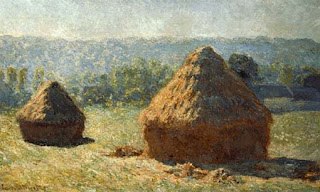 In October 1890 Monet wrote a letter to the art critic Gustave Geffroy about the hay stacks series he was painting, saying: "I'm hard at it, working stubbornly on a series of different effects, but at this time of year the sun sets so fast that it's impossible to keep up with it ... the further I get, the more I see that a lot of work has to be done ...I'm increasingly obsessed by the need to render what I experience, and I'm praying that I'll have a few more good years left to me because I think I may make some progress in that direction.."

Monet was fifty when he wrote this. He would live 36 years more and leave the earth only months after he had finished his huge garden panels which now hang in the Orangerie in Paris. In 1890, he could not comprehend his future, anymore than we can ours. What miracles may happen this year to any of us?

A New Year's thought for you!
Posted by Stephanie Cowell at 8:58 AM No comments:

searching for the real Camille 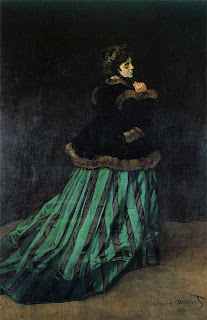 Who was she really, this woman Claude loved so much and lost so young? Sad how the great loves and models of so many artists have disappeared into the mists of time. She was born in Lyon in 1847, making her just seven years younger than the handsome Claude. And yet still, almost a century and a half after they met in Paris and fell in love, fragments of her life and personality are emerging. In 1947 a maid in the house of a descendant of Claude's best friend Bazille found a box of drawings, prints, and photographs, some sketches by Claude of her. Then some twenty years ago, a journal by an older friend of Monet's was found, describing her charm. And after this what do we have? The many paintings where her artist lover showed her not simply a female shape in the midst of light, but her lovely face. We have few portraits by Monet showing the clear features of his model, but Camille he painted clearly.

How does a novelist take such slender information and form a story? One can tell something of his intense feelings for her in that he truly painted her. She is 19 in this picture. I feel her elusiveness and his intense love.

The writer Ruth Butler also searched for Camille in her nonfiction book Hidden in the Shadow of the Master: The Model Wives of Cézanne, Monet, & Renoir.
Posted by Stephanie Cowell at 8:32 PM 1 comment:

Email ThisBlogThis!Share to TwitterShare to FacebookShare to Pinterest
Labels: Camille Doncieux, Hidden in the Shadow of the Master, Ruth Butler

Christmas among the impressionists... 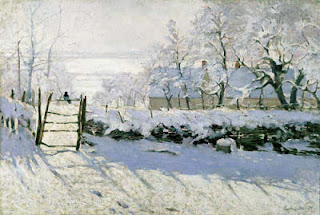 ...is a hard subject to research, and I am afraid I have come up with very little but that Edouard Manet once gave Berthe Morisot an easel for Christmas. I would most kindly appreciate any more information from my readers. Though Claude Monet was not religious in any way (but for nature), his second wife Alice was a devout Catholic and surely walked down the cold road a short way from Giverny to the church for Midnight Mass on Christmas Eve.

A happy holiday to the many readers of this blog!

The painting is of course Monet's famous MAGPIE IN THE SNOW.
Posted by Stephanie Cowell at 5:09 PM 1 comment: 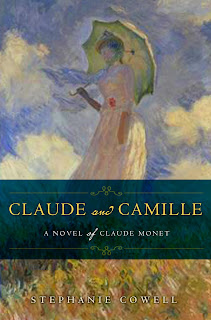 It is 3 1/2 exciting months until publication of Claude & Camille: a novel of Claude Monet (Crown) and the newly designed cover uses Claude's haunting portrait of a woman. She seems to blend with the sky, almost becoming the air, not quite obtainable, the ideal feminine. So for those many people who are accustomed to the original cover of a photograph of two young lovers, I can assure you not one word of the passionate story has been changed, but the art on the book jacket has now rightfully been given to the young painter himself.

The original of the 1886 painting can be found in the Musée d'Orsay in Paris.
Posted by Stephanie Cowell at 4:09 PM 1 comment:

Degas and his ballet girls 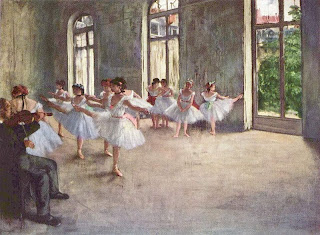 Degas turned to painting and drawing ballet girls in the 1870s, having obtained a pass to attend rehearsals; it is estimated he portrayed them in sketch or final work at least 1500 times.

The ballet girls were then lowly paid working girls, dancing to bring their families out of poverty, often accepting a wealthy lover to pay the bills. (The young adult novel Marie Dancing by Carolyn Meyer is a wonderful portrayal of Degas and the young girl who modeled for his Little Dancer.) Degas was also fascinated by the angles of the gaslit theater which the Goncourts in their journals described as "tenebrous and glimmering...forms that disappear into shadows in the smoky, dusty silence."

The young girls, pushed by their mothers into the world, were often desperate and hungry, an odd reality which one does not see in their delicate depictions by the intense Degas. And, one might ask, where are the male dancers? Where was the Parisian Nureyev? Ah, but ballet in 19th century Paris was almost entirely feminine! When Coppelia was performed in 1870, even the principal male role was danced by a woman! No lifting the prima ballerina above "his" head, I imagine! But all this is another story, belonging more to the history of the ballet than a blog on the French impressionists.
Posted by Stephanie Cowell at 3:44 PM No comments:

This painter taught Monet and Renoir? 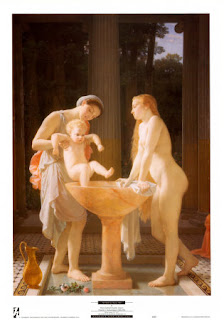 This is a typical painting by the Swiss artist Marc Gabriel Charles Gleyre. Monet and Renoir found themselves his students in the 1860s for a time and soon left due to (shall we say?) radical differences of style. In my endless paths of research for CLAUDE & CAMILLE, I came across a description of his Paris studio which was typical of the time:

"....a great barn, where the wind came in through every crack, lit by two enormous windows...a model stand, a high stool, two broken chairs, an old armchair, a chest of drawers which held drawings, a table with a basin and some soft soap for washing brushes...two or three easels and portfolios leaning up against the walls and a coal house for storing fuel. Gleyre would not allow anyone to sweep up because dust was bad for paintings, and he used for a long time to sleep in the room on a camp bed and so caught rheumatism."

This is from a fascinating book called Daily Life of French Artists in the Nineteenth Century by Jacques Letheve, translated by Paddon.
Posted by Stephanie Cowell at 3:05 PM 1 comment:

the first novel about an impressionist was written in 1886 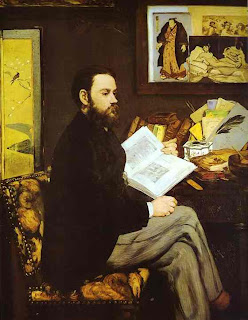 The writer Émile Zola was good friends with the struggling artists who became the impressionists, but was especially close to Cézanne whom he had known since childhood. However, in 1886 Zola used his intimate knowledge of the art world and studios and fictionalized the life of the sensitive Cézanne and the Bohemian world of the painters in his novel L'oeuvre (The Masterpiece). Some people have suggested that the model for the tormented painter (called Claude!) was really based on Claude Monet, who said he did not recognize himself or any of his colleagues in the book. Others said it was Edouard Manet who served as inspiration. Likely it was a composite portrait of many artists.

The scene in the novel where the artist paints and repaints his canvas until he destroys it entirely is very depressing, but the portrait of the art world of Paris in the 1860s and 1870s is wonderful.

Manet painted this portrait of Zola almost 20 years before the novelist would write L'oeuvre.
Posted by Stephanie Cowell at 5:40 PM 3 comments:

who really was Victorine Meurent? 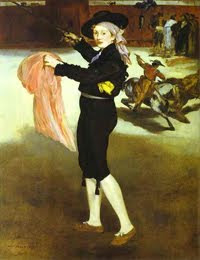 A few years ago when I was in the Metropolitan Museum gift shop ferreting out research books for my novel CLAUDE & CAMILLE: A NOVEL OF MONET, I found a fascinating, slim paperback about an art historian's search in old Paris archives for clues to the life of Manet's favorite model, Victorine Meurent. Called ALIAS OLYMPIA, the author Eunice Lipton tells of her determined chase to discover what she could of this fascinating model. Part biography, part memoir and some fiction, I found it an unusual and compelling book.

The independent Victorine, who also played guitar and violin, broke off from Manet when she began to take art lessons on her own. One year her work was accepted to the prestigious Salon when Manet's was refused. Only one of her paintings is known to survive. The writer George Moore who met her in Paris when she was older describes her as "a thin woman with red hair, brown small eyes set closely, reminding me of little glasses of cognac... She lit cigarette after cigarette..."
Posted by Stephanie Cowell at 5:12 PM 2 comments: 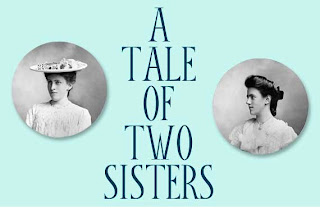 In 1908 in mid-Wales, the sisters Gwendoline and Margaret Davies began their collection of impressionism at a time when the artists were still greatly ignored by most individuals and institutions. By the time they had finished, they had gathered works by Cézanne, Monet, Bonnard, Manet, Renoir and Van Gogh. Heirs to a great fortune, they slowly grew in their tastes. When they first viewed the artists' work in Paris, they claimed it was "too impressionistic" but Monet's paintings of Venice enchanted them and drew them in.

The collection (which includes Renoir's La Parisienne) is on loan from National Museum Wales to Amerca and will be shown at the following museums:
Everson Museum of Art, Syracuse (October 9, 2009–January 3, 2010);
Corcoran Gallery of Art, Washington D.C. (January 30–April 25, 2010);
Albuquerque Museum of Art & History, New Mexico (May 16–August 8, 2010).

The picture of the sisters is from http://www.antiqueandfinearts.com

Posted by Stephanie Cowell at 4:10 AM No comments:

how Monet almost didn't have his water lily garden 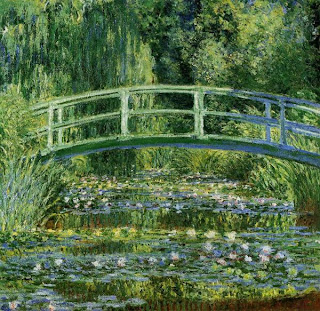 The truculent French fathers of the tiny town of Giverny exclaimed, "Non, monsieur!" when Claude proposed to install a water trough from the River Ru to the pond in his new land which he had purchased beyond his house and flower garden over rail tracks. It was 1893 and the peculiar artist had been their neighbor now for ten years. Now what did the odd fellow with his strange paintings want? The local people shook their heads, refusing his request. Monsieur wanted to grow peculiar aquatic plants in the pond? It would poison the water! Claude was furious and raged to his wife, "The hell with the natives of Giverny. Throw all the aquatic plants in the river!"

But the country residents of Giverny did not know how stubborn was the will of the 53-year-old painter. He would have this garden! After two months of letters to attorneys and newspapers, his requests were granted and the water lily pond began.
Posted by Stephanie Cowell at 3:38 AM No comments: