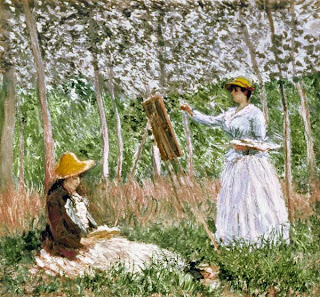 Blanche Monet was an adolescent when she and her five siblings moved into Monet's drafty house in Vétheuil, accompanying her married mother Alice who was then falling in love with the highly masculine painter. Almost at once the young Blanche was following Monet to paint and was soon painting on her own in a style much like the man who became her stepfather.

Not only was the caring Blanche a stepdaughter, but when she grew up she became daughter-in-law as well to Monet, marrying his chemist son Jean. When Jean died far too young, Blanche moved to Giverny to care for Monet in his old age. In those years she did not paint herself. She resumed her art after her stepfather's death and had a few solo exhibitions of her delicate paintings. When the bombs of World War II fell, Blanche wrote to Count Metternich asking him to protect the house and an official notice was tacked to the door, saying, "This is Monet's house. Forbidden to the forces of occupation."

If Blanche had not cared so intensely for the old Claude Monet, he might never have completed his great panels which hang in the Orangerie today. Thus the Prime Minister George Clemenceau dubbed her "The Blue Angel."

The picture is by Monet and shows Blanche and her sister as young girls; Blanche, of course, is absorbed in painting.
Posted by Stephanie Cowell at 4:01 PM 1 comment: