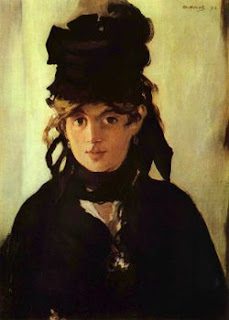 Here is a portrait of the lovely young artist as seen by her colleague Edouard Manet (who was rather in love with her). Born into a good Parisian family in 1841, she and her sister Edma showed a much stronger gift for painting than the usual well-bred girls of their age who would make pretty watercolors and tuck them in an album to show visitors. Art was her joy and torment, for she never felt she was good enough though her work was warmly welcomed by her fellows Pissarro, Renoir, Monet and others for display in the first impressionists' exhibition. The critics and some of the public, however, were scandalized by the exhibition's paintings which they called merely sketches; one man even shouted that modest Berthe was a whore. Pissarro promptly punched him in the face.

Much more to come on her exquisite work!
Posted by Stephanie Cowell at 6:29 AM